For the past couple of days I have been wondering how I could get a touch of nature into my artwork. I am generally an indoors person in the fact that I adore technology and the wonderful things that it can offer; as such I always feel guilty that I am not out discovering ‘the great outdoors’ as much as I should do. So I was wondering if it would be possible for me to bring the outdoors, indoors.

The only way I have ever approached doing this is by drawing and/or painting it. So when I got my hands on Painting Watercolour Landscapes – The Easy Way, I was absolutely thrilled. But. It’s not easy. Nothing about it is easy. And after giving some of the simplest tasks a try, I can happily say that watercolours are not for me! And nor is realism. So, I’ll have to think of another way to bring natures influence into my work! 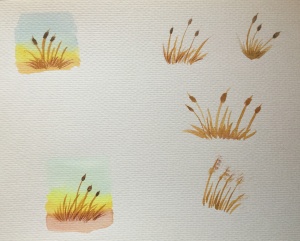 I have a couple of ideas that are forming on how to achieve this, but there are a few logistical things I need to get over before I give it a go, so other than this I don’t really want to say to much about it. Wow, that was vague and entirely pointless, sorry! But i am a bit excited about it and don’t want to get in to deep if it’s something I find that I can’t actually do. 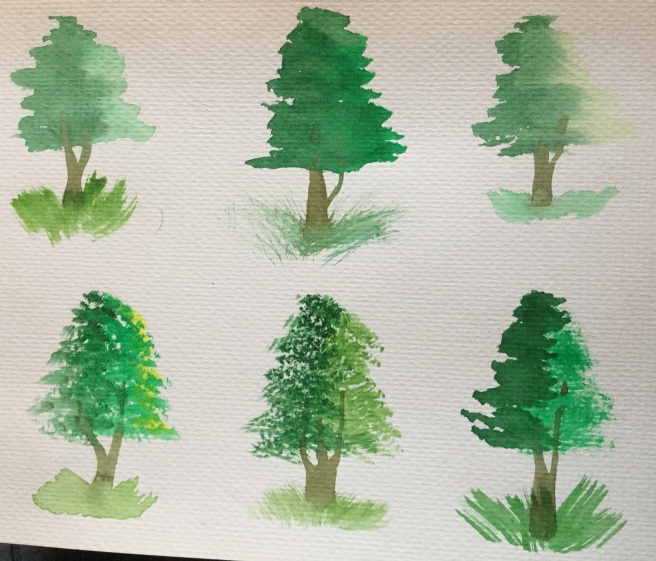 The whole watercolour process wasn’t for me though, as much as I wanted it to be. I could feel myself getting more and more down spirited the more I painted! I think thats what this journey is about for me. Finding things that work and rubbing out the things that don’t.

I don’t know what it was about watercolours and realism here, but I just kept hearing that inner voice telling me this wasn’t my calling or I couldn’t do this! So I struggled, even with these simple offerings.

Needless to say, I don’t think I’ll be heading in this direction again in a hurry. It’s a shame, because I think there is something very magical about watercolours – but that’s okay, I can still admire the works of others in this medium.

I mentioned in my first post that I checked a book out from the library – Abstract Art: Techniques and Textures – well, I managed to find a little bit of time this week to give one of the ‘lessons’ a go.

I think a big part of this journey for me is finding something that the book keeps referring to as ‘Visual signature.’ A style of painting and process that is completely and undeniably me. It’s something that I feel I have been lacking in my art for a very, very long time. In the past I have always used references in one form or another and while I don’t think that this is as ‘bad practise’ as the art community I was once a member of believes, I still feel pretty unremarkable because of it.

I know, I know. How is following instructions in a book any different, right? Well, I think because the lessons in this book are really open – it encourages you to do things in your own way and not just follow the instructions to the letter and copy what you see. It gives you the basic techniques, but lets you interpret them in your own way. Which is something that I feel I was looking for in an artistic workbook. A helping hand in finding my own voice. There are a lot more exercises in the book which I’ll be working through that’s for sure!

As for this first painting exercise, I’m not so sure about it. It was a fun experiment and it was actually rather enjoyable watching how the contrasting colours worked and dribbled through one another. I’ll probably try something else like it again at some point, but I don’t feel that it was quite right for me personally – but I am looking forward to having another flick through the book and seeing if there is a technique that resonates more with me than this way of working did.

Please let me know what you think in the comments?

I think as a part of my artistic journey I should be branching out from what I have done before; finding different creative ways to express myself in order to find what is at my core. As a part of this, and because I saw it on my twitter feed a few days prior, I headed down to Bury Art Museum for a free Workshop they were holding called, Catalogue Poetics – I didn’t quite know what to expect or what the workshop was actually about, but I thought it would be artsy being held in a gallery and all. So I bit the bullet, told the other half I wanted to go somewhere and off I went.

It was a fine first step into the creative atmosphere again, as there was only a couple of us; so the process wasn’t at all as scary as I was first fearing.

The workshop itself was about Archives and how they in themselves are a work of art and creative writing.

More than that though, we were talking about how we would archive works. Going on the creative process again was at first rather daunting. This is the first time in months, maybe years, I feel I have accessed a higher level of thinking when it comes to a creative approach. Honestly, I was thankful for it. There was some gentle prodding to get the brain going again and while looking at an exhibit containing Starbucks coffee cups and a disposable bag (Only fine art, eh!) and attempting to archive he exhibit in the way that a traditional archivist would – followed by our own individual way.

In the end, I somehow stumbled across the idea of using how I looked at the exhibition as a means of archiving it and the steps that I took, along with my initial thoughts on the pieces. Even this was interesting – whenever I see an exhibition I look at the information about it first, then have the intention of walking around in a clockwise order, but get distracted by something that looks ‘prettier’ and drift over to that instead! So somehow, my archival technique would end up being read like a set of dance instructions.

You can see the pink post-it notes on the table, which is where the idea formed. To be honest, it was mostly just nice to be around two other ladies who shared an interest in the creative world and connect with that side of things again, even if it is in a way that didn’t completely resonate with me. When I think of art, I tend to find more pleasure in the purely visual side – paintings on walls and such – but it was nice to experience another side of creativity and see what could come from it.

Just the other day, I went on this lament about how I was no longer in love with something that had once completely lit up my world and life. How I was so disconnected with this thing and how that made me feel; horrible and a like I was a fraud. It was a terrible realisation to come across. And for once that I couldn’t blame it on the grey, dull weather; as I was sitting outside watching my son playing in his sand pit. I honestly wanted to break down and cry. I felt like I had betrayed art somehow and that I was at a total loss of how to cope with this sudden loss of something that had once meant so much to me.

So, I did what I always do when faced with a problem such as this. I tried to level out my over thinking and am trying to enact some changes in my life that will allow me to face artwork and everything that goes with it again.

I made this blog to try and ‘document’ the artistic journey that I am about to embark on so that I can keep a record of my thought process and the things I will learn. Also with this journey I am hoping to experience more and make a lot of positive changes in my and my sons life. One of my greatest fears is that I will be a terrible role-model for my son and he will grow up resenting or hating me for ‘not doing enough’ with/for him. So this artistic journey is two fold; find my love for art again and develop into the person that I want to be.

The first step in this journey was popping down to Bury Town Library and get some books relevant to the direction in which I would like to go. (As well as a couple of fiction books)

They are Artists’ Rescue Tactics, Abstracts – Techniques and Textures and Painting Watercolour Landscapes – The Easy Way

I’ll take a gander through these books and report back my findings and experiments in future posts.

For the time being, I admit I am somewhat nervously excited about this little journey and where it will take me. It’s not the first time I have tried to do something like this; but there is a determination in how I am feeling towards it this time. After the trip to the library I popped into the local coffee shop for a cup of tea. It’s a bit of an ‘artsy’ place called Ground Up. I discovered that they are having an Open Mic night, which I am tempted to try and get along too – just to see what it’s all about as I’ve not been to one before; but I thought it might be a nice way to meet people and connect with like-minded people. Even if I don’t make it, it’s the ability to notice these things that I need to grip once again. Somehow, get a bit more involved in my own life, rather than just drifting and wallowing in this fog of bitterness.

The calm of painting and playing makes for relaxing days

This picayune world, my own private Lilliput.

We all travel the road into the hobby, may as well go with a bear